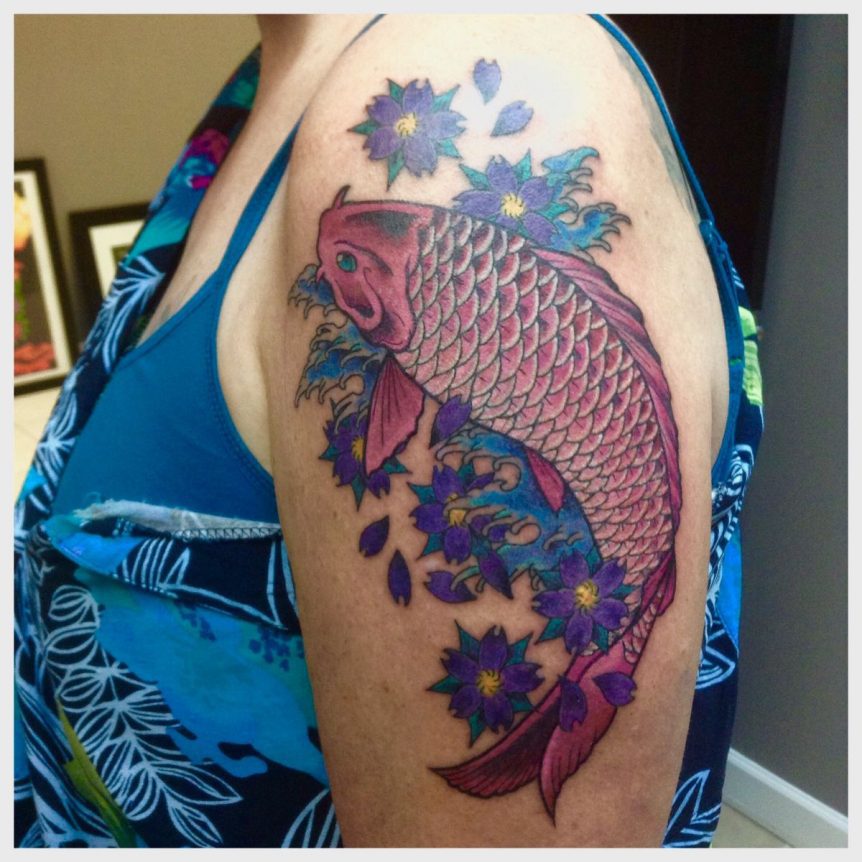 Koi fish are actually Chinese in origin and koi means ” carp”. Koi were introduced to Japan and today are a modern pricy hobby with some rare colors and patterns costing thousands of Yen.

Koi tattoos can can also make wonderful cover up tattoos. They have excellent visual impact and interesting body positions. Lots of pop and drama can go into a koi fish tattoo.

Indeed the koi fish is very popular in Asia as show pieces of wealth. Some businessmen house koi in private aquarium facilities to hide the expense from their wives who traditionally determine all family financial expenditures.

In art the koi are pictured with certain floral elements to represent the season. Maple leaves indicate fall and cherry blossoms indicate spring. The fish come in most colors including black, yellow, red, orange, blue, white and calico varieties.

Koi fish are also associated with dragons. Legend has it one in several thousand fish will ascend to the sky as a dragon when they swim past a certain point in a particular river named after dragons.

Some loosely based meanings of koi fish in art include courage, loyalty and being a samurai warrior. The are generally considered lucky and to have the power to absorb negativity. For this reason goldfish are often kept in office cubicles as pets of workers.

Cat loves doing koi fish tattoos and dragon-koi tattoos. From the realistic to the cartoony, from grey tones, to realistic colors to candy land color bombs, we like working on these interesting, adaptable fish.